Becoming a Pro and the New Moon

I wrote last week that on the 9th of June I decided to open a new trading account and see if I can make it into the AxiSelect incubation program. I also decided that I will share my trade journal, warts and all, in real-time.

Here is an incomplete list of my motivation for taking on the challenge:

A quick trading story before we get into some learning.

On Monday morning the 14th of April 2008 I walked into my new trading office at MF Global. For those of you who don’t know who they were click on the link for more details; they were a major global financial derivatives broker that went bankrupt in 2011.

I had recently emigrated to Sydney Australia and was trading my own capital and a wealth American businessman’s. I knew very few people and I was starting to get a little lonely so I decided to look for what was called back then a Trading Arcade. Simply put it was office space that brokers rented out to traders who would trade an account through their brokerage so they could earn commission and recoup some money from surplus office space.

I went for an interview and they were quick to let me join when I shared the size of my trading account I wanted to open. I remember it like yesterday when I arrived that fateful Monday morning for my first day. I know it was the 14th April 2008 because on one of the giant TV’s was the US Masters final round in play and there was a South African by the name of Trevor Immelman in the lead. The office had 10 trading desks with many large screens on each desk, your dream trading floor setup. 9 of the desks were already occupied so it was obvious which was my station. This truly felt like your first day at a new school.

What I didn’t know was that the 9 traders in the room were part of a group who had recently left one of the largest US investment banks to setup their own prop trading firm and they were not one bit pleased with having an “outsider” yours truly invade what they felt was their turf.

As I was settling in getting used to my new rig I noticed Trevor Immelman hit his tee shot into the water and so started the snide comments trying to make me unhappy. They started making choking sounds, saying things like isn’t that typical of South African’s, knowing full well that I was South African. Anyway the sledging continued for the week

and I finally said to myself am I friggin mad, so on the Friday I told them all to get stuffed and I ducked. Why I remember this story is because one of the guys in clear view of my desk traded a 1 minute chart and I can still picture his setup with all his chart windows which was the first time I ever saw and watched a day trader in action.  If you read my trade journal you will see I am embarking on a very similar journey and this is not the kind of trading I have typically done in the past so I am out of my comfort zone and eager to learn a new way or modify it to work for me.

The other message I wanted to convey from this story is that trading as a professional is a serious business. To make it you have to be like an elite athlete and competition requires a serious, disciplined attitude with lots of hunger, not to mention an edge. If these characteristics are missing from your trading then you are almost assured of failing.

We look at the average number of trades a trader does in a month. Please ignore the 6 decimals its a little bit of overkill, I know you get the point that 65 trades were made in January, etc….

Tomorrow is the new moon. The moon’s waxing and waning plays a big part in many religions. As a religious person I perform certain rituals every month in recognition of the new moon.

Around 2005 I was introduced to the lunar influence on ones trading. At first I thought this was like voodoo magic and was quite skeptical. However I am a very opened minded person so for a period of time I used indicators on my charts that reflected the various phases of the lunar cycle on them. I see that many of the popular trading platforms have moon phase indicators available.

As we are talking about trade journals I am reminded how in tune I have become with my moods around the lunar cycle. As someone who has kept a journal on my emotions on and off for 30 years I would often describe a change in my mood pattern only to discover after the fact that it was either a new moon or a full moon. Don’t be so surprised by this as we know that the moon influences the tides in the ocean. The human body is made up of roughly 60% water so it shouldn’t be too difficult to accept that we are

collectively as a people influenced by the moons gravitational pulls on our collective mooods.

I was going through Tom McClellan’s latest report last night and came across this chart which was quite unexpected as I already knew I was going to write about moons and the markets. 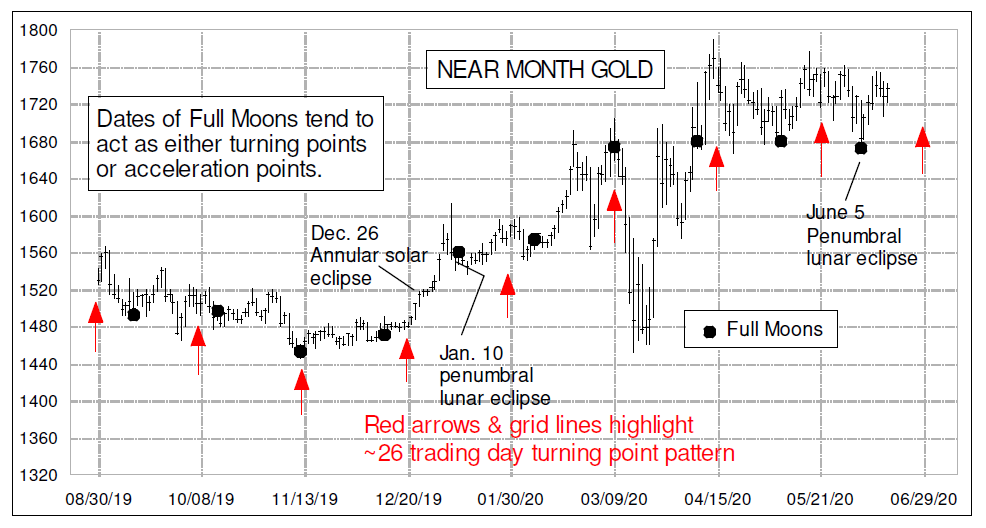 There has been quite a bit of academic literature focused on the Moon Phase affect on Stock Markets. Ilia Dichev and Troy Janes wrote a paper called Lunar Cycle Effects in Stock Returns, where they analyzed 100yrs of stock market data across 25 countries. The effect they found was quite amazing. 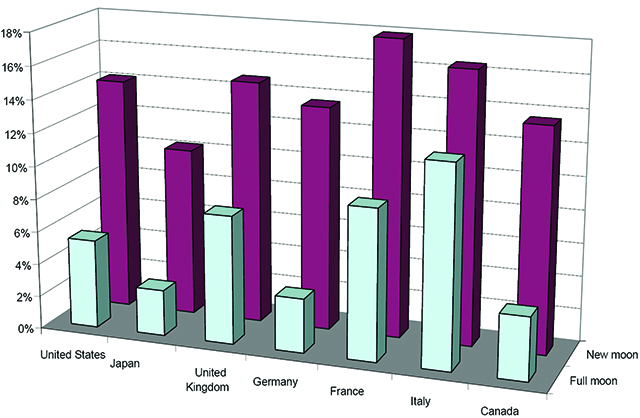 You can see that the markets typically perform much better around a new moon which is seen as a positive phase versus the full moon phase which can be seen as a destructive phase.

I guess I will be seeing y’all on the Dark Side of the Moon ?.