Leave a comment
Every day at 3pm Sydney time and 6am Kiev time Vlad my co-founder and I speak for an hour about the day gone by, the day ahead, interspersed with a healthy dose of intellectual conjecture.
For the past few years I have been trying to develop a major thesis to explain/forecast major market regime changes. I call my theory the Market Complex and over the course of the next few years I hope to develop it more and share it with you as it becomes clearer. For now it is my thesis that I still need to develop.
On Wednesday during one of my daily discussions with Vlad I made the mistake of suggesting that there was a formal mathematical description to my thesis. He was quick to shut me down and I quickly identified where I had used a very loose understanding of mathematics to suggest something that was more from the field of complex theory a branch of computational science and maths.
I tend to think quite deeply about things and this conversation with Vlad sparked a thought back to an event that took place in 1651. No don’t worry I wasn’t present when Thomas Hobbs published his manuscript called the Leviathan for Charles II who was in the midst of a battle royal (excuse the pun, you will need to study some history to catch my drift ?).
Hobbs was into political philosophy after studying the classics such as Plato, Descarte, etc.. In his forties, he walked passed an open copy of Euclid’s famous book Elements and fell in love with the logic of mathematics in general and geometry in particular. What Hobbs tried to achieve with his classic Leviathan was break society and its interactions into formal mathematical logic. The societal model that came out was a power seeking monster, like the Leviathan. Not even Charles II liked what he read. Hobbs was forced to navigate a very tricky life after publishing his book, as his book alienated a lot of different people with his theory and being an atheist which was soon to become a crime made him a target. Nonetheless his works remain a major part of the field of political economy. Thank you for indulging me with my little lesson.
I was thinking about how society behaves in times of crisis. Is it really possible to work out how people will behave with any mathematical certainty? Who would have guessed that Australia under the threat of the corona virus would be gripped by toilet paper shortage fear. 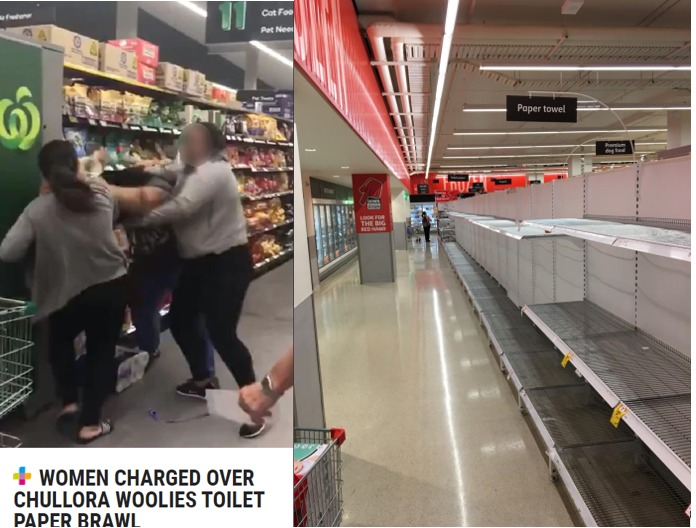 As you can see from the above images people are fighting over toilet rolls, this is not isolated, whilst most supermarkets have run out of stock. I am quite sure that there weren’t any models that had forecast with any degree of certainty that toilet rolls would become the most demanded product under the threat of quarantine.
The part that fascinates me is how the irrational behavior we are witnessing is certainly predictable from within my world view of the Market Complex and complexity theory. While I don’t believe you can predict the specifics, i.e. that toilet rolls are going to be the object of the panic’s desire. I do however, believe that you can predict the panic. The trillion dollar question is how.
Join me as we try and figure it out.
Mike's Thought Piece
Market Panic Unusual Volatility Alert