The Obvious is Not so Obvious

Mr X is told that he can stay at the Hilton in Time Square for FREE. After a 4 weeks stay of pure extravagance and indulgence he thinks he better get back to his mundane life. Mr X goes to the front desk to check out and is presented with a bill for $42,000. He nearly passes out with shock as he has no way of paying the bill. He says to the person at the desk he will come back later. He runs out the building looking for the person who said he can stay at the hotel for free. Eventually he finds Prometheus chatting to a group of pretty girls in the open stand on the Time Square cobbles. Prometheus says to Mr X I didn’t say anything about checking out. I said you can stay for FREE. He says to X why don’t you go back to the Hilton and continue you your stay it is much better to owe them $500k at the end of the year than $42k after a month.

Does this story sound familiar, this is what politicians are effectively doing by providing people/businesses with debt that they have no chance of paying back.

What politicians have done is naturally popular and I for one have to say on a humanitarian level it is probably the right thing. Helping people in need is the right thing to do, in times of pandemics, no questions asked. However, we have seen that governments are addicted to debt and cannot stop. Governments and families are meant to save in good times so that when the famine comes they have stuff in store. Remember the biblical story of the great economist, Joseph.

A lot of people have told me that you cannot fight the money printing and I will tell them they are wrong! However, the problem is I cannot tell you when, I can only tell you probabilistically that increasing the debt load to keep things afloat will result in what economists call diminishing returns.

The more formal name is Marginal Revenue Product of Debt (MRPD). In 2019, $1 of debt, generated 40 cents of additional GDP, this is not the kind of investment return you are looking for and it has been getting progressively worse.

This is where things get a little complicated as most people don’t realize that economics is not accounting, the relationship with debt is non-linear. There are many research papers that suggest there is a threshold a tipping point where a countries debt levels relative to GDP start leading to diminishing returns.

Let us dig a little deeper for those of you who are interested in some economic theory. In order for debt to be productive it needs to be used for productive purposes which introduces the production function of the economy.

There is something called the savings-investment identity which means that it is true by definition (it cannot be argued logically). The amount saved in an economy will be the amount invested in new machinery, new inventory, etc. In other words investment must be financed by some combination of private domestic saving, government saving (surplus) and foreign saving.

As expected personal savings shot up in March to 13% significantly above it average as people start to cut back on their monthly expenses trying to save as much as possible. The fact that people are saving more is a whole other interesting story with its impact on monetary velocity but we will do that another time.

We are not done yet, I need to complete the puzzle. 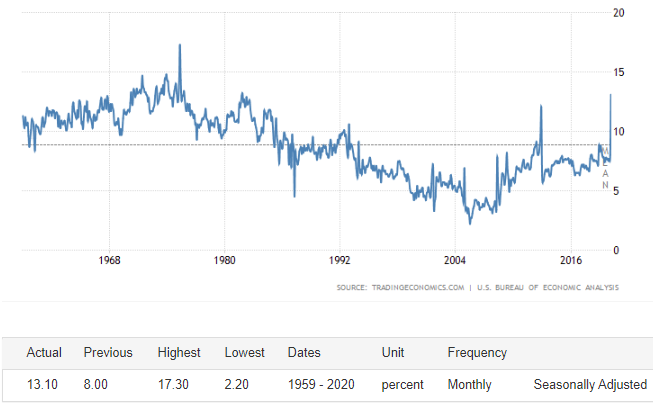 If S (saving) = I (investment) then we are off to a good start, correct? Not so fast, as savings are made up of 3 components as mentioned above: private, government and foreign. We get a tick for the private, we will ignore foreign for now so let us look at government savings ???. 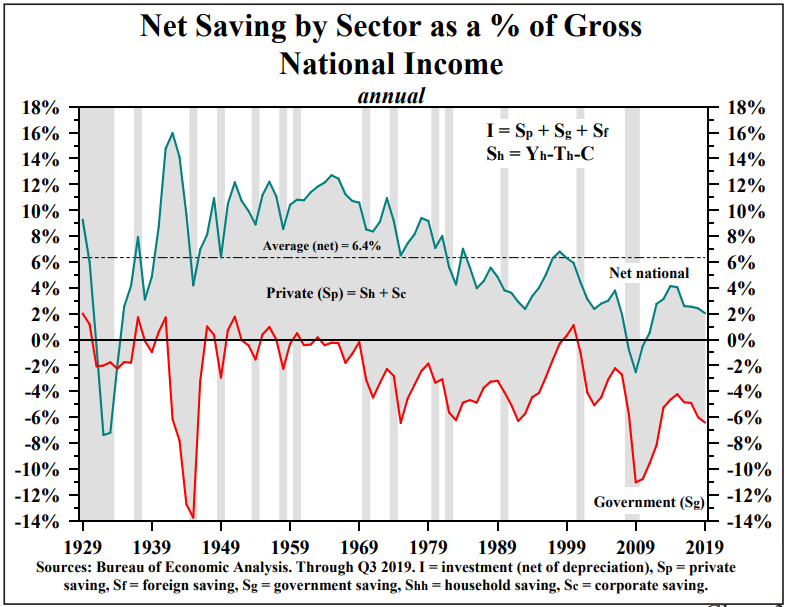 At the end of 2019 net national saving as a percentage of national income was just 2%, down from the average of 6.4% since 1929. Private saving was 8.4% but government dis-saving was – 6.4%. With all the current fiscal stimulus in 2020 we are likely to drop to a negative net national saving rate (see green line in 1st chart above) for the first time since the Great Depression.

Let us wrap it up. With negative saving there will be less investment into the economy and without investment the economy will struggle to grow. I am sure we have all come across zombie companies/countries/families where their ability to function normally is so constrained due to the demands of servicing their overburdened balance sheets.

This is our new normal. So while debt may help fuel a business or economy for a period of time, it too eventually runs out of time making the obvious not so obvious.